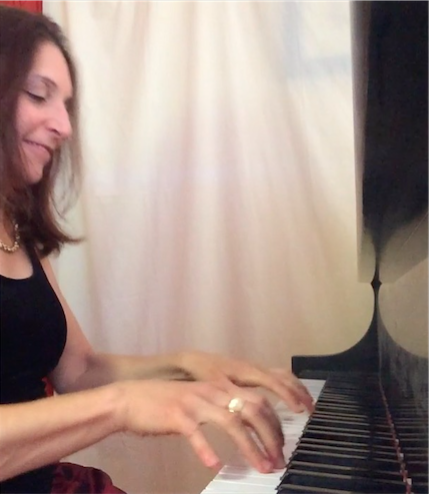 Ferris performs locally at venues such as the Beverly Hills Hotel, the Regent Beverly Wilshire, and the Four Seasons.   Internationally, she performs in show bands aboard cruise ships in Europe, Iceland, Russia, the Middle East, India, Asia, Australia, South America, and New Zealand.  She performed for the Archbishop of Canterbury for whom she arranged his favorite hymn as a jazz waltz.

Ferris composes and records music for live shows, film and TV. She has 2 CDs released by Opus as well as a

self-released solo piano Christmas Sampler CD (soon to be made available). Other credits include the music and lyrics for Roger Corman’s animated feature ALADDIN & THE ADVENTURE OF ALL TIME, the score and songs for the feature SCREAM QUEEN, the multi-award-winning documentary 3 GIRLS I KNOW, and the award-winning silent film FRANKZ & BEANS IN SPERM WARFARE!

She served as Music Director and Composer for the live show MURDER IN THE MANDARIN BALLROOM. Her music appears in TV shows such as PLANET’S FUNNIEST ANIMALS, PROJECT RUNWAY, GREEK, THE MILLIONAIRE MATCHMAKER, and REHAB: PARTY AT THE HARD ROCK HOTEL More of her credits can be found at IMDb. Currently, she is working on the feature documentary, LOST SOUNDS OF THE SILENTS.

Ferris graduated from the New England Conservatory of Music and completed the Dick Grove Composing & Arranging Program. She also holds a teaching credential from Cal State University, Northridge in Music with an emphasis on choir, K-12, and an Orff I certification. She is a Board member of the West Los Angeles Music Teachers Association of California, and a member of the American Society of Music Arrangers and Composers and the American Guild of Organists.  For over 20 years, she has enjoyed enabling countless students of all ages to realize their dreams of learning to play and excel at the piano.